‘Local Lowdown’ on the Hub Today

You can also listen to the podcast:

Available now on Apple Podcasts, Spotify, Stitcher, Google Play, Amazon Music, RadioPublic, or wherever you get your podcasts.

A List Podcast with A.Sherrod Blakely and Kwani A. Lunis:

Listen on Spotify, iTunes or watch it on YouTube

Protesters in Portait for NBC10 Boston:

June 17th: ‘I Hope You Hear Me, Because I’m Tired’: Boston Protesters in Portrait

June 11th: ‘We All Need to Stand Up’: Boston Protesters in Portrait

June 9th: ‘Imagine If That Happened to Your Kid’: Boston Protesters in Portrait, Part II’

May 8th: Sports Are on Pause, But ESPN’s Maria Taylor Is Still Putting in Work

April 16th: Covering Coronavirus: What People Are Searching During the Pandemic 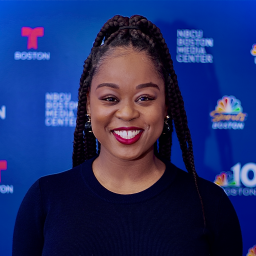 Boston College Alumna with a bachelor’s degree in communications and a passion for sports journalism. She currently works at Comcast SportsNet New England as a Production Assistant. In December 2015 she completed a six-month apprenticeship at WBZ-TV, Boston’s CBS affiliate. This full-time experience at WBZ provided a rare opportunity to learn from reporters and producers in DMA #8 while also gaining valuable experience. While at Boston College she wrote for the Boston College SB Nation page, “BC Interruption.” Kwani was also a member of Boston College television’s sports show, The Talon, and the University’s sports radio station, WZBC 90.3. Managing the Boston College women’s basketball team for three years gave her a lot of experience with the behind the scenes of a Division I team while also earning her a varsity letter. In the fall of 2014, she worked at the New England Sports Network as a remote production intern for the Boston Bruins. During the summer of 2014, she interned at WEEI 93.7 sports radio Boston for the “Dennis and Callahan” morning show. Professional affiliations include the National Association of Black Journalists and the Boston College Varsity Club.

The Latest: “10 Questions with NBC10 Boston”